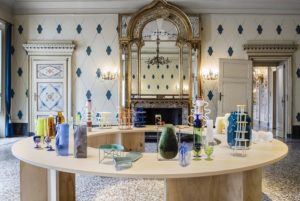 Today I’m talking about the Lake Como Design Festival: a project that, by involving local realities, proposes an immersive experience in some of the most emblematic venues of the city and its lake and in the works of well-known international creatives.

“History Repeating. How designer look at history”:  a collective exhibition –  that takes place at Sala del Ridotto of Teatro Sociale in Como –  dedicated to the role of history and sources in which pieces by famous designers from different eras coexist.

Palazzo Valli Bruni, in the city centre, is hosting “20/21: a dialogue between the 20th and 21st centuries” an exhibition of objects and accessories for sale by independent contemporary designers who have been inspired by the last century.

While at Palazzo Mantero, open to the public for the first time, Lake Como Design Festival presents “Reeditions”, a project that furnishes some of the rooms of the historic residence and stages a series of re-editions of 20th century design.